The Oracle EPM Cloud Business Processes for Enterprise Planning and Budgeting, Financial Close and Consolidation, and Tax Reporting each support multiple data load formats. The most common of these is the Planning File Format which requires a defined layout. The OneCloud Convert CSV to Planning File Format Command streamlines the creation of this file. This article describes how to configure the Command. There are multiple parameters within the Command that we need to explore.

The below represents a sample data file that has been generated by earlier Commands within the Chain. This is the file that will be used as an Input to the Convert CSV to Planning File Format Command. The headers in this file are important and will be used by various parameters within the conversion Command.

The SUI Columns parameter defines the header for the Planning Format data file that will be generated. The Point-of-View and Data Load Cube Name fields must be specified in this parameter. The remaining fields are used to specify a dimension to which data will be loaded as well as the columns from the input data file that contain the financial data to be loaded. When specifying a dimension to which data should be loaded, it is best to select a Sparse dimension for optimal data load performance with the Planning File Format.

In the SUI Columns parameter, enter the name of the field in the input data file that contains the dimension members to which data should be loaded. In this example, this is Entity.

The Target Column parameter builds an association between the field in the file specified in the SUI Columns parameter and the dimension name in the EPM application. In this example, the Dimension name is Entity.

As noted previously, the headers of the data columns must match a dimension member in the application in order for the data to load properly. In this example, Jan is a member of the Period dimension.

The FCCS Type parameter specifies the cube to which data will be loaded.

Below is an example Output from the Convert CSV to Planning File Format Command which can be loaded to the application.

The below illustrates the steps in a Chain to convert a file to the required Planning format, uploaded the result to the Oracle EPM Cloud inbox, and subsequently import the data into the application. 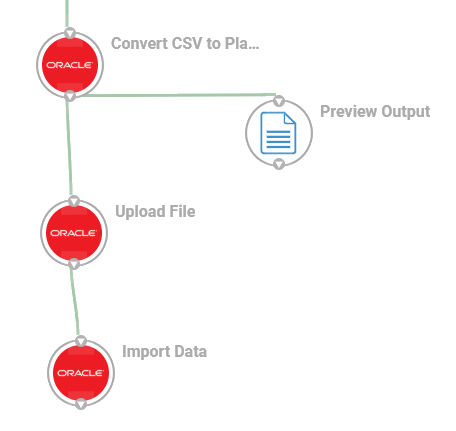 If you need additional support, feel free to email us at support@onecloud.io.